R: What is the prevalence of childhood obesity in Asia versus other regions? What factors might contribute to these differences?

TS: The prevalence of childhood obesity is 11.7% in developed countries and 6.1% in developing countries.1 In Asia (excluding Japan), 4.9% of children younger than 5 years were estimated to be overweight or obese in 2010 – a 53% increase since 1990 (Table).1 This is lower than the prevalence in Africa (8.5%),1 but because more than half the children from developing countries live in Asia, the absolute numbers are greater. In Hong Kong, 14% of school-aged children were overweight in 2000/2001 (increased from 12% in 1997/1998), with 7% being obese and a higher prevalence observed in boys.2 The prevalence of childhood obesity in rural China is low (0.4%),3 but national estimates in 2005 indicated that 7.7% of Chinese youth were overweight and 3.7% of them were obese.4 Different cultural habits and socioeconomic levels impact nutrition and physical activity patterns, which in turn affect rates of obesity. Cultural attitudes to childhood weight also vary: in China, a plump child is viewed positively,5 as fatness is often associated with wealth and health, which may not be the case in Europe.

R: Is abdominal obesity a significant concern among children?

TS: Abdominal obesity was defined as a waist circumference that was greater than the gender- and age-specific 90th percentile based on data from the National Health and Nutrition Examination Survey (NHANES) III (1988–1994) in a study of 2–18-year-olds.6 Levels of abdominal fat in newborns are related to abdominal fat levels at the age of 2 years, although further studies are needed to explore whether these associations persist in later life and are related to metabolic syndrome outcomes.7 However, increased visceral adipose tissue in newborns may be associated with insulin resistance.8, 9

R: What are the risk factors for childhood obesity?

R: What specific factors might have contributed to the increase in childhood obesity in Hong Kong and China?

TS: With China’s economic growth came increased incomes and the ability to buy more food, but levels of education have not kept pace. Intake of unhealthy Western fast food items is often viewed as a sign of affluence. It was recently found that the majority of Hong Kong primary school children are much less active than is recommended by the health authorities, and increasingly engaged in sedentary behaviour such as ‘screen time’, which in turn leads to deteriorating health.12 Furthermore, a growing number of Hong Kong children fail to meet basic nutritional recommendations, and a high percentage of their energy intake comes from saturated fat, sugar and other calorie-dense foods,13 causing an increase in overweight and obesity levels.  In urban areas, both parents often work long hours, and children are cared for by grandparents or domestic helpers who may have poor knowledge about nutrition.5

R: How can these caregivers be educated regarding childhood obesity?

TS: Children should be given water, not juice, to drink with meals.15 ‘Playing with’ and exposure to different foods (especially brightly coloured fruits and vegetables) early on reduces young children’s fear of trying new foods. Parents should not overfeed young children, and should respect their capacity for appetite self-regulation.16 Establishing healthy eating patterns and routines early in life is vital, and may regulate responsiveness to food cues and eating behaviour in later life.

“Establish correct routines for eating, being active and sleeping from the beginning.” – Dr Tanja Sobko

R: What is the optimal sleep duration in terms of preventing childhood obesity?

TS: A UK study showed that children who slept for fewer than 10.5 hours per night at the age of 3 years had a 45% higher risk of becoming obese by the age of 7, compared to those who slept more than 12 hours.19 Hong Kong parents often return from work late in the evening, which can delay their children’s bedtimes. Toddlers aged 1–3 years need 12–14 hours of sleep per day, and preschool-aged children need 11–12 hours.20, 21

R: What is the Targeting Early Obesity (TEO) programme in Macau and how can the findings be applied locally?

TS: To help governments develop locally individualized, effective preventive programmes targeting childhood obesity, it is important to understand local habits. In a research collaboration with the Macau Government, we compared families that included obese versus normal-weight parents of new-born children to look for key determinants of childhood obesity. One of our more interesting findings was that young children have identical physical activity profiles to their mothers, so mothers should be targeted as a priority – increasing their physical activity will likely have a corresponding effect on the levels of physical activity of their children (unpublished data). When the findings are published, they will be widely applicable in Hong Kong because the settings are so similar.

R: How can local healthcare providers improve the diagnosis and management of childhood obesity?

TS: Identifying abnormal patterns of weight gain in infants is a first step in reducing the risk of
obesity.16 At every well-child visit, weight-for-length or -height should be measured and the body mass index (BMI) calculated.22 These should then be plotted on WHO (for children aged 0–23 months)23, 24 or Centers for Disease
Control and Prevention (24–59 months)25 charts to monitor their growth. Children whose BMI is above the 85th percentile are overweight26 and should be targeted for intervention.

Table. Past and predicted future prevalence of overweigt/obsesity in children aged 0-5 years in Asia: 1990-20201 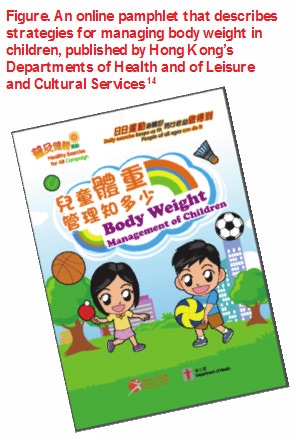 [Literature Library] The CHILD Cohort Study: Co-occurrence of bacteria in breast milk and the infant gut

[Literature Library] Maternal probiotic use during breastfeeding and infant health