We recently had the privilege to speak with Dr Hugh Simon Lam, Associate Professor in the Department of Paediatrics at The Chinese University of Hong Kong. During the interview, Dr Lam reviewed the types of heavy metal exposure affecting the Hong Kong population, and discussed the potential link between heavy metal exposure and neurodevelopmental outcomes. This article presents highlights from the interview. 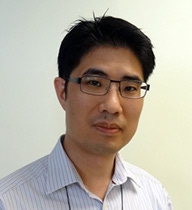 Heavy metals are naturally occurring metallic elements with high atomic weight and relatively high density. Their multiple industrial, agricultural, domestic, medical and technological applications have led to their ubiquitous distribution in the environment. Even though there is a lack of consensus as to what constitutes a "heavy metal", this term has recently been used to describe metals and semi-metals with no known physiological benefits and with the potential to cause toxicity to humans and the environment. Lead, cadmium and mercury are prime examples of such "toxic metals". These systemic toxicants are known to induce multiple organ damage even at lower levels of exposure, and are of public health significance.1

WHAT ARE THE SOURCES OF HEAVY METAL EXPOSURE?

Mercury
Mercury occurs in several forms, including elemental mercury, methylmercury and inorganic mercury. Elemental mercury, or metallic mercury, is used in a variety of industrial or manufacturing processes, and in medical devices, such as dental amalgams, sphygmomanometers and thermometers. Since elemental mercury can be vapourized at room temperature, it can also be inhaled and absorbed via the lungs.3

Organic mercury, or methylmercury (MeHg), is one of the most common heavy metals that can be readily absorbed through ingestion.3 The principal source of human exposure to MeHg is the consumption of contaminated fish. Large predatory fish, such as tuna, king mackerel and swordfish, have been shown to contain a high bioconcentration of MeHg (Figure 1). Although the dominant health concerns arise from gestational exposure to MeHg, infants may also be exposed postnatally to MeHg from breast milk should their mothers consume fish or foodstuffs that contain high levels of MeHg.4 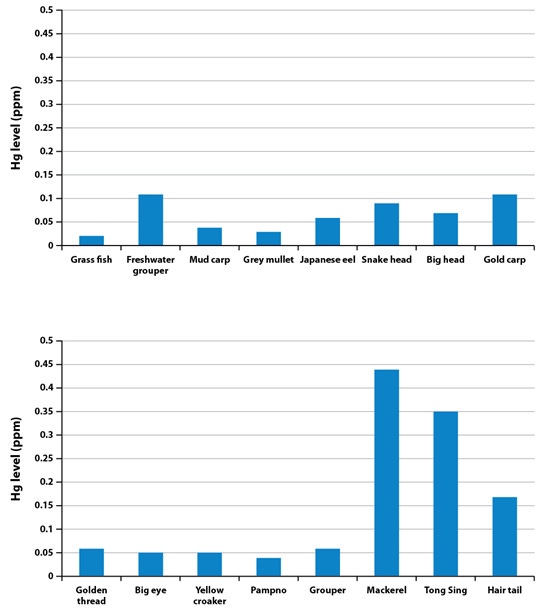 Exposure to inorganic mercury compounds, elemental mercury or vapourless mercury is less common as compared with that to MeHg.4 Nonetheless, cosmetic soaps and skin-lightening creams that contain inorganic mercury compounds or mercury salts are reportedly still being produced in several countries.3 These compounds are absorbed through the skin across the epidermis, as well as via sweat glands, sebaceous glands and hair follicles. 5,6

The principal source of human exposure to methylmercury is the consumption of contaminated fish, particularly large, predatory fish

Lead
Lead has been used in the production of fuel, batteries, paints and ceramic glazes, as well as in solder used in water distribution pipes and food cans. The main source of lead dispersing into the environment (ie, air and soil) is atmospheric lead that results from the use and combustion of leaded fuels. Even though the use of lead in various industries has already been or are in the process of being phased out due to tighter regulatory control, lead poisoning still remains a significant health problem.7

Cadmium
Cadmium exposure is encountered in industries dealing with pigment, metal plating, some plastics and batteries. Exposure to cadmium in humans occurs predominantly through the ingestion of contaminated foodstuffs, especially grains, cereals, leafy vegetables, seafood and offal. Cigarette smoke and incineration of waste containing plastics and nickel-cadmium batteries can result in increased airborne exposure to cadmium.7

WHAT ARE THE SYMPTOMS OF HEAVY METAL TOXICITY?

Acute heavy metal toxicity is often a result of occupational exposure and is rarely from dietary exposure. Acute effects include increased occurrence of lymphocytic aneuploidy, discolouration of front surface of lens of the eyes, insomnia, tremors and hyperexcitability.9 Chronic heavy metal toxicity is generally manifested as a continuum of symptoms and effects, which depends on the nature of the metal, dose, duration of exposure and the underlying health status of the exposed individual (Table 1).7,10

Lead exposure in children and adults can cause a wide spectrum of health problems, ranging from subtle effects on the metabolism (eg, myalgia, paraesthesia, fatigue) and cognition (eg, poor concentration, irritability) at lower but more chronic levels, to seizures, paralysis, renal impairment, gastrointestinal disturbances at higher levels of acute exposure (≥25 µg/dL in children and ≥40 µg/dL in adults).7

Exposure to toxic levels of mercury has profound effects on the central nervous system (CNS) and can be rapidly fatal. High levels of mercury exposure through, for example, inhalation of mercury vapours, can lead to life-threatening injuries to the neurological system. In adults, symptom onset starts with sensory disturbance, followed by visual field constriction, ataxia, cognitive decline and death. At lower but more chronic levels of exposure, the typical constellation of symptoms – erethism (eg, irritability, excitability and excessive shyness), tremor and gingivitis – can arise.7,10

HOW DO YOU TEST FOR MERCURY EXPOSURE?

The provisional tolerable weekly intake of MeHg, stipulated by the Joint Food and Agriculture Organization/World Health Organization Expert Committee on Food Additives (JECFA), is 1.6 µg/kg body weight, an amount that is considered sufficiently low to protect the developing fetus.15 Mercury exposure can be quantified by the mercury content in hair, blood and urine (Table 2). Hair mercury levels can reflect chronic exposure at various time points, depending on the portion of hair that is being analyzed, whereas blood mercury levels are useful in determining acute exposure. Mercury levels in cord blood serve as a biomarker for prenatal MeHg exposure during the third trimester of pregnancy. Since mercury can also accumulate in the kidneys, urinary mercury levels help to detect recent inorganic mercury exposure. Urine mercury concentrations over 10 µg/L indicate that a person has been exposed to higher mercury levels than the average population.16

WHO ARE MOST AT RISK OF HEAVY METAL TOXICITY?

Besides individuals who live or work in or near an environment where exposure to heavy metals is prevalent, numerous epidemiological studies have also demonstrated that children and fetuses appear to be particularly vulnerable to the neurotoxic effects of heavy metals, even at low levels (0.1–1.0 mg/kg/day).17,18 Children absorb a higher proportion of an ingested dose of inorganic lead salts compared with adults, and are more prone to developmental delays secondary to lead toxicity.11,19 In addition, the fetal brain is especially vulnerable to damage from exposure to MeHg, which readily crosses the placenta and appears in breast milk. Prenatal exposure to MeHg, via the maternal diet, may also result in diffuse CNS damage and disruption of cellular migration in the developing brain, leading to adverse neurocognitive consequences.23

IS THERE A LINK BETWEEN MERCURY EXPOSURE IN MOTHERS AND NEUROCOGNITIVE DEVELOPMENT IN CHILDREN?

Low-dose prenatal MeHg exposure has been suggested to give rise to long-term adverse neurocognitive effects.21 In Hong Kong, MeHg exposure is largely the result of high and steady fish consumption.22 Prenatal MeHg exposure levels in Hong Kong are relatively low compared with other high fish-eating communities globally, and this is attributed to the low MeHg concentration found in commercially available fish. However, its adverse effects on infants can still be observed. In a follow-up study of an original cohort of mother-infant pairs in Hong Kong, in which infant cognitive outcomes were determined via a visual sequencing task and subtests for verbal memory, high cord blood mercury concentration was associated with deficits in long-term neurocognitive outcomes. As evidenced, despite low levels of maternal MeHg exposure, adverse neurocognitive outcomes, albeit mild, are still possible.23

IS THERE A LINK BETWEEN FISH INTAKE, MERCURY EXPOSURE AND ECZEMA?

Eczema is a recurrent disease known to affect the quality of life (QoL) of children, independent of disease severity. In view of the increasing incidence of childhood eczema in developing countries, several environmental and hygiene factors have been identified. To address whether fish sensitization was associated with fish consumption behaviour, eczema severity and blood heavy metal levels, a local study was carried out in 119 eczematous and 43 non-eczematous children, among whom there were no differences in average weekly fish consumption and blood mercury levels. While blood mercury levels correlated with fish consumption behaviour (Table 3), there was, however, no correlation between fish consumption behaviour, eczema severity, QoL and heavy metal levels, and fish sensitization in atopic eczema patients.24

Furthermore, a cross-sectional analysis was carried out to assess whether QoL and eczema severity are associated with abnormal serum levels of heavy metals in children in Hong Kong. This analysis elucidated that it was not mercury levels, but rather serum lead levels that positively correlated with poor QoL, disease severity, eosinophil count and log-transformed immunoglobulin E.25

WHAT ARE THE REMEDIES FOR HEAVY METAL TOXICITY?

Despite low-dose mercury exposure being common in Hong Kong, acute high-dose poisoning is uncommon. A thorough fish intake assessment can, therefore, help practitioners to detect mercury exposure. As a preventive measure to decrease the risk of prenatal mercury exposure, pregnant women should be advised to consume appropriate amounts, that is up to 12 ounces or two average meals a week, of fish and/or shellfish that are low in mercury.26 That being said, drastic reductions in fish consumption may not be beneficial and careful nutritional considerations are necessary to reap the dietary benefits of fish while minimizing the risk of fetal exposure to heavy metals.

With regard to lead exposure and toxicity, parents should receive guidance about intervention, as well as optimal nutrition. Nutritional intervention should aim to reduce gastrointestinal absorption of ingested lead, which includes iron and calcium supplementation, thorough washing of leafy vegetables during food preparation, a balanced diet with moderate intake of food items that have high lead content (eg, lime-preserved eggs and shellfish), as well as frequent meals.8,27

To decrease the risk of prenatal mercury exposure, pregnant women should be advised to consume up to 12 ounces or two average meals a week of fish and/or shellfish that are low in mercury

Heavy metal exposure is ubiquitous and can have a lasting effect on health across the life course. In this regard, early intervention through public education is necessary to prevent toxic exposure and ensure long-term health and outcomes. Equally important are evidence-based recommendations for preventing harmful environmental exposure and public health measures that must be put in place to reduce heavy metal exposure and cultivate informed consumer-purchasing patterns.