Interview with Carol L Cheatham, PhD – The clinical significance of maternal genetics on nutrient availability and child cognitive development: What advice can I give to my patients?

At a recent interview, Carol Cheatham, PhD, explained the role of important nutrients on a child’s cognition, particularly the role of long-chain fatty acids such as docosahexaenoic acid (DHA). DHA can be produced in the body, however, polymorphisms in the gene regulating DHA metabolism can cause lowered levels in mothers, potentially hindering their children’s cognitive development. Dr Cheatham explores the FADS2 gene and provides her advice on how to manage the surprisingly large proportion of population who carry the polymorphic allele. This article presents highlights from the interview.

12 min read
Listen to the Article

R: What role do important nutrients such as fatty acids, choline and lutein play in brain development?

CC: The essential fatty acids are metabolized in the body to long-chain polyunsaturated fatty acids (LCPUFAs) and comprise approximately 15–30% of the brain’s dry weight.1 Fatty acids have both structural and functional roles: docosahexaenoic acid (DHA) is one of the most abundant fatty acids in the brain and is found in the outer phospholipid membranes of every cell in the body,2 including the synaptic and dendritic membranes of neurons.1 DHA regulates and maintains the fluidity of lipid membranes,3 which is an essential characteristic for normal cellular operation. Functionally, DHA interacts with the lipid bilayer-bound ion channels and receptors involved in releasing neurotransmitters across the synapses1: DHA is known to impact cognitive function via regulating neurotransmitter metabolism, synaptic growth and neuronal communication.4 Choline is essential for myriad cell functions and is a major dietary source of methyl groups.5 Choline is implicated in gene silencing and expression and is required for the synthesis of neurotransmitters and phospholipids.5, 6 Lutein is important for visual health and is preferentially taken up in the retina, where it comprises the macular pigment and prevents damage associated with macular degeneration.7

Nutrients do not exist in isolation and often work synergistically to exert its benefits on the brain: choline facilitates the transport of DHA from the liver to all parts of the body,8 including the foetal brain where it plays a key role in brain and memory development.5 Both lutein and fatty acids influence visual acuity through maintaining retinal pigment epithelial cells,7 which is an important effect as the visual system contributes significantly to the development of cognitive and social processes such as spatial awareness, and face and emotion perception.9

R: What is the FADS2 gene and why is it significant for cognitive development? 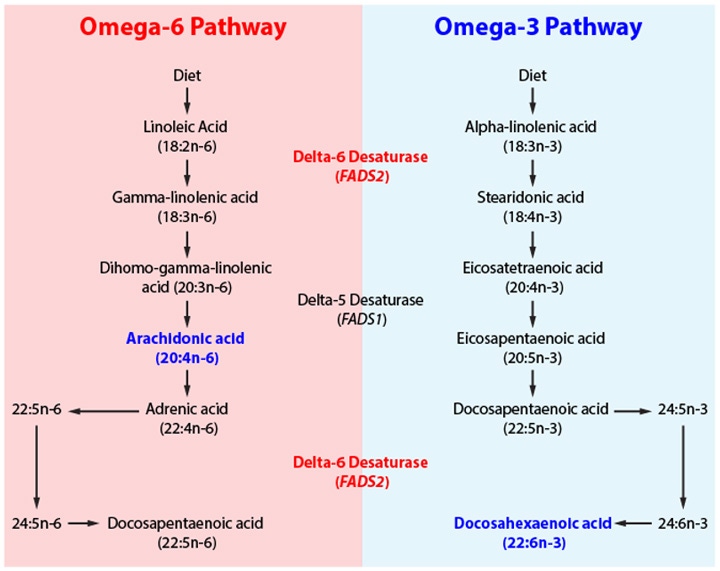 Figure 1. The metabolic pathway of omega-3 and omega-6 fatty acids. FADS2 encodes for delta-6 desaturase which is required for the synthesis of arachidonic acid (AA) and docosahexaenoic acid (DHA) in both pathways.4

Both pathways require the same enzyme in order to synthesize DHA and AA, and an unbalanced consumption of either n-3 or n-6 can disrupt the availability of the enzyme. Endogenous DHA is likely to be low in individuals who consume high amounts of n-6 from processed and fast foods, and low amounts of n-3 from plant sources, a feature of diets such as that of the modern American diet.4 As DHA is predominantly found in brain structures central to cognitive abilities – the frontal lobe and hippocampus – disproportionately low intake of n-3 and excess consumption of n-6 fatty acids from the diet may be detrimental to cognitive development.4, 8

Do genotypic variations in the FADS2 gene cause any downstream effects on a child’s cognitive function?

CC: Single nucleotide polymorphisms in the FADS2 gene complex are associated with differences in the composition of n-3 and n-6 fatty acids in the body.10 FADS2 polymorphisms can include individuals with the G allele, which is associated with a lowered capacity to synthesize DHA endogenously.11 Both pregnant and lactating mothers with polymorphisms had, in general, significantly lower DHA levels in their plasma and human milk.10 The clinical effects of these maternal polymorphisms on a child’s cognitive development remains to be assessed; however, as maternal DHA is involved during the assembly of the brain, it is possible that maternal genetics play an important role in the structure of a child’s brain, whereas the child’s genetics could be significant to functional aspects of their cognition. Mental processing at 4 years was correlated with maternal intake of DHA during pregnancy and lactation,12 and a study showed that mothers with FADS2 polymorphisms had children with lowered memory abilities.13 Preliminary data show that contribution of maternal genetics to a child’s cognition persists till 16 months of age.13

Children with polymorphisms may have an impaired ability to endogenously convert DHA from n-3 fatty acids (alpha-linolenic acid) and will need to source DHA directly from their diet. The literature suggests that variations in a child’s fatty acid metabolism can influence the effects of breastfeeding on cognitive development.14 A retrospective study found that children possessing the more efficient fatty acid processing FADS2 C allele and were breastfed displayed higher mean IQ scores compared to children with the C allele who were formula fed,14 however, this advantage was not seen in children homozygous for the polymorphic G allele (less efficient DHA synthesis), as similar IQ scores were seen irrespective of feeding method. (Figure 2).14

“Mental processing at 4 years was correlated with maternal intake of DHA during pregnancy and lactation, and a study showed that mothers with FADS2 polymorphisms had children lowered memory abilities”

While the implications of a lowered IQ are minimal in a child with relatively good brain health, this may be detrimental to cognitive functioning in children who already display developmental delays. 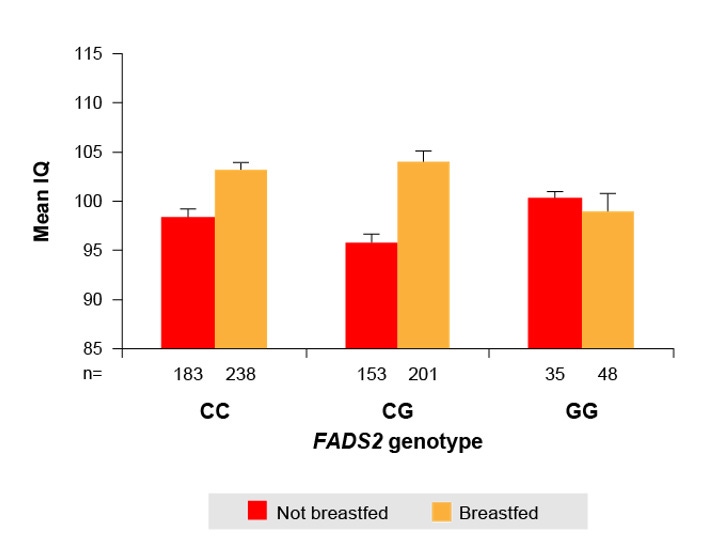 R: How common are FADS2 polymorphisms in the population?

CC: In both the US and Australia, the prevalence is estimated to be around 7% of the population. In Han Chinese, 60% have a polymorphism, most likely due to generations of coastal-dwelling people eating high amounts of DHA-rich seafood. Similarly, Greenlandic Inuits also have, for many generations, consumed a staple diet high in DHA from Arctic fish, placing the FADS2 gene under strong selective pressure and removing its need to produce DHA endogenously,15 resulting in polymorphisms in almost 100% of the population. Problems arise when these populations, a large proportion of who are unable to synthesize DHA endogenously, move to urban areas and indulge in a modern Western diet low in DHA content.

“In Han Chinese, 60% have a polymorphism, most likely due to the generations of coastal-dwelling people eating high amounts of DHA-rich seafood”

R: What are some nutritional management options that should be tailored to someone with a polymorphic FADS2 gene?

CC: Genotyping patients, while ideal, is rarely performed in clinical practice and costs approximately US $120 per test. Those who possess an FADS2 polymorphism need to consume greater amounts of DHA from their diet. While pregnant mothers are often advised to avoid fish for fear of mercury poisoning, DHA has been found to be protective against the neurotoxic effects of environmental contaminants, including mercury.8 Lactating mothers with polymorphisms also need greater amounts of DHA as studies have shown the usual 2–3 recommended servings of fish failed to increase DHA levels in human milk in those with a polymorphism.16 While doctors should ideally genotype their patients to determine the optimal intake of DHA, both mothers and children should consume a well-balanced diet regardless of polymorphism status.

CC: The best source of DHA is from DHA-rich foods which form part of a well-balanced diet. Mothers should strive to consume these foods as frequently as possible, irrespective of whether they possess variations in their FADS2 gene. Aside from fatty fish – salmon, herring and mackerel – DHA is also abundant in egg yolk. Eggs are indeed an ideal food for building brains as it also a good dietary source of choline and lutein.

“In Han Chinese, 60% have a polymorphism, most likely due to the generations of coastal-dwelling people eating high amounts of DHA-rich seafood”